Family car options? We have tested Acadia All Terrain

Family car options? We have tested Acadia All Terrain

Just for Mums (..and maybe Dads!) June 13, 2018 217Views 0Likes 0Comments
This post is my first car review: Acadia All Terrain, a family car.
We arrived in Dubai in 2010 with one dog and me heavily pregnant with our first child. Back in our country, we had a small car, ideal for the three of us as the dog was going with us everywhere. We came without the car and rent here for the first month one similar to ours. Three months later, the baby was born and we got a second dog, found in the desert by some friends.
I can say that this was actually our first experience in buying a car. Before, my husband was riding only the bike, me being the only one with a driving license. When I bought my car, the only criteria was to fit my budget, which was not so big. Now, it was another story altogether. We had a newborn so the car should be able to accommodate a baby car seat and a stroller. The truck should be big enough to fit two dogs and baby paraphernalia, which in my mind was equal to half of the baby-related items we have in the house (first-time-mummy stress). We settled in the end for a GMC Terrain, 2009 model, the smallest version that also ticked the budget. We also bought it during Ramadan so we got a good discount on it. 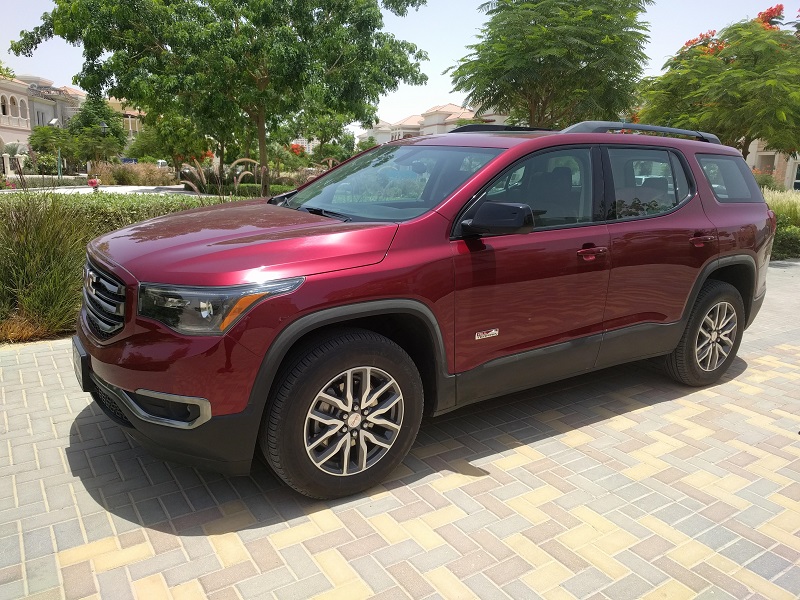 Why we need a bigger car

Fast forward, seven years later, we have two kids and still two dogs. The kids are older, no need for strollers but now we have bikes and scooters and not to mention how much we take when we go to the beach or for a staycation. Now we also have a nanny that doesn’t really fit between the two much bigger car seats so we have to compromise somehow: either we go just the four of us and leave the nanny home or one of us go with the nanny and the kids. So, here we are in 2018, looking for a bigger car, preferably a 7-seater. We went back to look for a better model of GMC as I really liked the car and we were shown the Acadia All Terrain. I got to drive for a week a model with five seats but all others have seven.
I don’t know how you are, but I feel more secure in big cars. My husband drove a Mini for the past seven years and I was freaking out every time I had to drive it. I was much more comfortable in my “little big car”. I say “little” because Acadia is much bigger. It took me a few days to adjust to the dimensions and not drive over the corners. And the trunk is huge, exactly how we need it. We also had the bicycle support installed but the smallest bike actually fits standing in the trunk (that’s how big it is). It is ideal for families with children that have to carry around sports equipment or musical instruments. No worries, everything will fit in there.

Features of the Acadia All Terrain

The feature that I liked most at Acadia All Terrain car is the little star on the side mirrors that blink every time is not safe to change lanes. It happened to all of us some times not to see a car coming because of the angle and nearly crush on the side. With this little star blinking, these situations can be easily avoided. Also in “the best” category fits the rear vision camera. This helps a lot with back parking without crushing anything around. I have to admit, several times I “crushed” my car in bushes or little poles as I didn’t see them.
There are other kids’ safety features also in place: blocking the windows from opening … and closing (if they are in the mood of playing up-down) or blocking the doors not to be open during driving. They can be open only from outside. It is very easy to mount car seats and there is ISOFIX option.
I really liked how smooth the acceleration is and the car is very stable when driving over 120km/h. I had to pay very much attention not to get over the speed limit and I always used the cruise control feature. I was impressed also with the number of airbags, like five if I remember correctly, but hope never to use them.
I was very happy with the gasoline consumption of Acadia All Terrain. I had my tank full and drove around for one week. Just to mention that I drive a lot, all over Dubai, sometimes I feel like a taxi driver, and for my old car I have to stop at the gas station at least twice a week. Of course, the tank is smaller but also the consumption is bigger. The Acadia All Terrain would save me at least Dhs 50/week in gasoline.
Last but not least, I want to mention the Infotainment system. It has voice-activated technology for radio and phone and Bluetooth streaming audio for music and selected phones. Also features Apple CarPlayTM and Android AutoTM capability for compatible phones was very very happy to use my smartphone apps through the system. 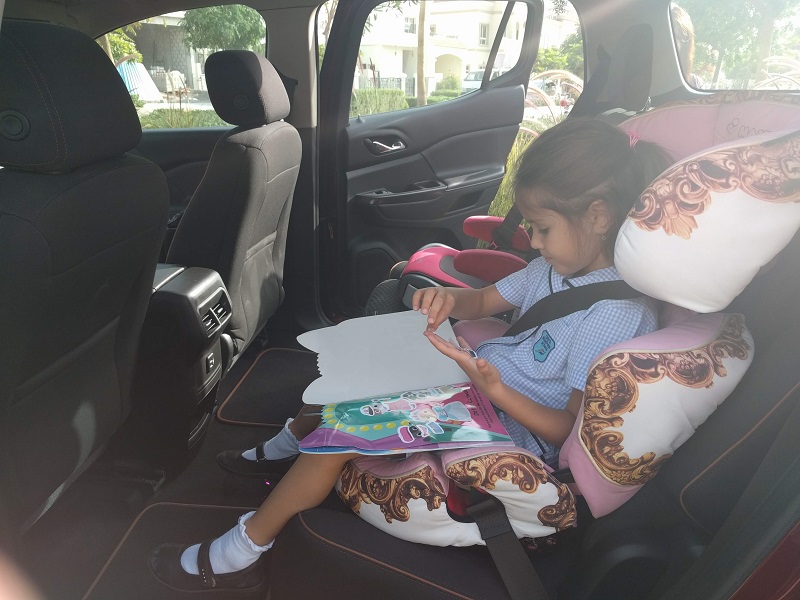 Spotting the signs of bullying and strategies to deal with it

Find out more in our Newsletter!